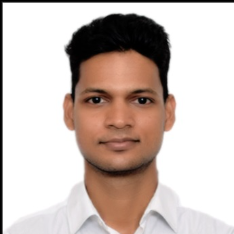 My interest includes drawing and Playing sports and doing workout. I have been drawing portrait sketch of people because i enjoy doing that in my free time. I also enthusiastic about learning new languages. I can Spanish as well, learning for 2 years. I like to talk about nutrition and importance of mental and physical health of a students.

I have been teaching for past 4 years in offline classes and online classes in one to one interaction. I have a passion to teach mathematics in a authentic and fun way so any average student can grasp all the concept easily. I have also GATE (Graduate Aptitude Test in Engineering) exam 3 times which is considered as one of toughest exam in world. I aced GATE exam in 2019, 2020, 2021 continuously in 3 years. I have also taught engineering mathematics to college students. In my last year I have taught electrical engineering subject such as Control System, Network Theory, Analog and Digital communication ,Digital Electronics. I am a freelancer tutor for past 1 year.

Algebra is one of the broad areas of mathematics, together with number theory, geometry and analysis. In its most general form, algebra is the study of mathematical symbols and the rules for manipulating these symbols, it is a unifying thread of almost all of mathematics. It includes everything from elementary equation solving to the study of abstractions such as groups, rings, and fields. The more basic parts of algebra are called elementary algebra; the more abstract parts are called abstract algebra or modern algebra. Elementary algebra is generally considered to be essential for any study of mathematics, science, or engineering, as well as such applications as medicine and economics.

Geometry is, with arithmetic, one of the oldest branches of mathematics. It is concerned with properties of space that are related with distance, shape, size, and relative position of figures. A mathematician who works in the field of geometry is called a geometer.

Probability is the branch of mathematics concerning numerical descriptions of how likely an event is to occur, or how likely it is that a proposition is true. The probability of an event is a number between 0 and 1, where, roughly speaking, 0 indicates impossibility of the event and 1 indicates certainty.The higher the probability of an event, the more likely it is that the event will occur. Statistics is the discipline that concerns the collection, organization, analysis, interpretation, and presentation of data. In applying statistics to a scientific, industrial, or social problem, it is conventional to begin with a statistical population or a statistical model to be studied. Populations can be diverse groups of people or objects such as "all people living in a country" or "every atom composing a crystal". Statistics deals with every aspect of data, including the planning of data collection in terms of the design of surveys and experiments.

In mathematics education, Pre-calculus or college algebra is a course, or a set of courses, that includes algebra and trigonometry at a level which is designed to prepare students for the study of calculus.

Integral calculus, Branch of calculus concerned with the theory and applications of integrals. While differential calculus focuses on rates of change, such as slopes of tangent lines and velocities, integral calculus deals with total size or value, such as lengths, areas, and volumes.

In mathematics, a matrix (plural matrices) is a rectangular array of numbers, symbols, or expressions, arranged in rows and columns. The size of a matrix is defined by the number of rows and columns that it contains.

Geometry is a branch of mathematics that studies the sizes, shapes, positions angles and dimensions of things. Flat shapes like squares, circles, and triangles are a part of flat geometry and are called 2D shapes. These shapes have only 2 dimensions, the length and the width.

Probability theory, a branch of mathematics concerned with the analysis of random phenomena. The outcome of a random event cannot be determined before it occurs, but it may be any one of several possible outcomes. The actual outcome is considered to be determined by chance.