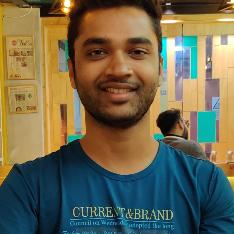 Mechanical engineer by degree, tutor by passion. Here to explore a new domain!

As a tutor, my aim is to help students attain personal growth and academic success. Also, my methods are designed to accommodate different levels of learners. I will help students get stronger in grasping concepts by teaching them how to interpret the fundamentals and how to derive one thing from another.

This originates from the study of right angled triangles. The relations between the three sides can be expressed as sine, cosine and tangent functions. These expressions of course have a deeper mathematical expansion as can be seen in their Taylor series.

Basic operations : addition, subtraction, multiplication, division come into picture along with integers, rational numbers, perimeter, etc. This is needed for the topics later in Algebra.

This not only has numbers but also variables of higher powers. For this, powers and their operations have to be clear. Solve for x is a typical kind of question in this subject.

Its all about sides and angles and the relations derived from them in a n sided figure. Sum of angles of a n sided regular polygon would be (n-2)180 degrees.

Before getting into calculus, study of functions like polynomial, rational, trigonometric, exponential functions is essential.

The rate of change of any function f(x) is denoted by dy/dx. This gives the slope of the tangent at a point on the curve. It has many applications in finding the maximum and minimum values, inflection points, etc.

Opposite to differentiation is integration, which is used to find the areas under a curve. This would later be useful in computing volumes of revolution in higher Mathematics.

Linear algebra as is self explanatory, is the study of linear mappings between variables. It could have equations in 2 variables, 3 variables or more, but the degree of the equations is always 1. It can be used to compute values of variables given a set of equations relating them.

When a function is dependent on more than one variable, the concept of multi variable calculus comes into picture. Here to find the rates of change of a function, one has to find the partial derivatives with respect to the individual variables.

This includes the most basic fundamentals of Maths, like percentages, proportions, addition, division, exponents and word problems connecting them. Understanding the question and putting it mathematically is important.

Its all about sides and angles and the relations derived from them in a n sided figure. Like sum of angles of a n sided regular polygon would be (n-2)180 degrees.

It is used to study how dispersed a data table is. Mean, mode, median, standard deviation, variance, etc are important concepts used to evaluate the given data.

Integers, natural numbers, negative numbers, decimals, etc...their representation on the number line and basic operations on them. Like 6 - (-3) = 6 + 3 = 9

This has various sub-parts like linear programming which is used to optimize manufacturing, transportation problems. It also has graph theory under discrete mathematics, operations research and continuous modelling.

A function having first order derivative, second order and higher order derivatives can be expressed linearly without any constants connecting them to give a general solution or a family of curves.

Word problems having varieties of considerations can be expressed in the matrix form. A matrix having m rows and n columns is called a m x n matrix. These are used to find determinants and hence check if the solution of an equation exists or not.

Addition + Subtraction - Multiplication x Division / These operations can be performed by the method of balls by lining them up in order and performing the calculation.

Expression of the form a/b where b is not 0. there are mixed fractions which can be converted to the improper form and then easily computed in the problems.

This is all about units of measurement. Measuring weights, temperature, distances, etc. Conversion of one unit to another is crucial. Like 25cm = 250mm = 0.25m and so on...where m is in metres and it is a unit of measuring distance.

Its all about sides and angles and the relations derived from them in a n sided figure. Sum of angles of a n sided regular polygon would be (n-2)180 degrees.

Fractions and decimals go hand in hand. Shifting decimals to perform operations is essential and an easy way to solve problems. Conversions from one form to another often simplifies the problem. 32.25 = 3225/100

Number of factors a number a^p * b^q * c^r equals (p+1)(q+1)(r+1). Using prime numbers, a large number can be factorized or broken into smaller parts and from that its number of factors can be calculated.