Are you a university or school looking for an online tutoring partnership ? Talk to Us

Our experts are available 24/7 to help you with Net ionic equations homework problems!

Get a Tutor Homework Help

Solution : The net ionic equation  will come by balancing both mass and charge.

(c) Not related to reaction

Question 3: Which of the following equations must be the net ionic equation of a neutralization reaction of a strong acid and strong base? 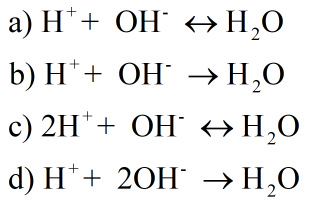 Solution : The net ionic equation shows those elements involved directly in a chemical reaction. So it must be b) as salt formed and strong acid, base must form ions and will be spectator ions.

We Are Different from Others!