Are you a university or school looking for an online tutoring partnership ?
Nomenclature of Compounds Homework Help

Atoms have a tendency to form chemical bonds with other atoms to get the Noble gas configuration. It provides stability to atoms. Compounds are the chemical species which are formed by chemical bonding of various atoms.  Some common examples of compounds are HCl, HI etc. 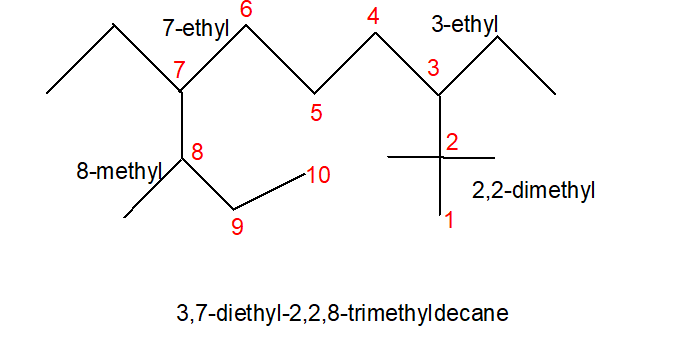 In the given compound, the longest chain contains 10 C atoms with 5 side chains bonded on the parent longest chain. The side chains must be written in alphabetic order along with their position as numeral value separated by comma.

Br^2O^3  must be Dibromine trioxide as there are two Br atoms and three oxide ions. Another example is MnSO4 that must be Manganese(II) sulfate. Since it is an ionic compound therefore no prefix of cation and anion must be added. Here Mn is a transition metal and can show variable valency therefore the oxidation state of Mn that is 2+ must be shown in parenthesis in Roman numeral.

In the given formula, Cs is an alkali metal and S is non-metal therefore it must be an ionic compound so no oxidation number must be written in parenthesis. Thus, the name of the compound must be Cesium sulphate.

Q. 2 Write the IUPAC name of the given organic compound.

In the given stricture the longest chain has 5 C atoms with -COCl as functional group and one methyl group as side chain. The functional group must get the least number thus, it should be 4-methylpentanoyl chloride.

Q. 3 Identify the root word, primary suffix, secondary suffix and prefix in the given organic compound. 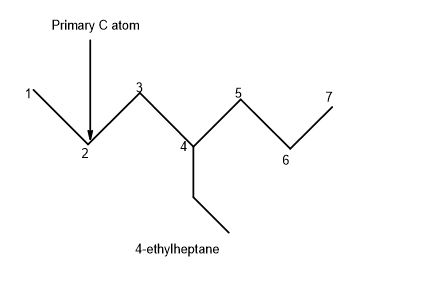 Take homework guidance from qualified solvers to get Chemistry assistance on the nomenclature of chemical compounds. We’ll instruct you on a whole lot of rules that are involved in this practice.

Whether you are in high school or a College-freshman, we’ll provide you step-by-step explanations as manuals for reference. If there is more than one functional group, prefixes like di, tri, tetra must be used to show their numbers bonded on the parent chain.

On the other hand, most covalent compounds without metals like carbon monoxide have two words in a name or a suffix. So you’ll have Carbon dioxide, carbon tetrachloride here.

We are the best study resource to delve into the examples to understand the naming process and rules.

Let’s also examine why when it comes to complex compounds there are no particular set of guidelines. In fact, we’ll figure out why the trivial nomenclature system is limited and several other names can also exist for one specific compound.

So seek our top chemistry experts to solve worksheet questions or get detailed analysis on the longest chain rule; naming of different substituents and the lowest set of locants; etc.

Scoring A+ in Chemistry is now possible when you have the best in the discipline to guide you at each step. Get ready to ace your exams and upgrade your knowledge all the way.

How to get Chemical nomenclature help to get top grades?

Take help from our trusted academicians to learn more about organic chemistry and the naming process. Here is how you can hire a top aide:

Step 1: Upload your assignment request by filling out details on our quick help form

Step 2: Reach an agreement on budget and deadline before you hire a Chemistry solver

Our assignment help services backed by a Money Refund policy are aimed to provide 100% original work.

We help you cover the basics and follow VARK (Visual, Auditory, Read/Write, and Kinesthetic) learning style to facilitate understanding of each student.

Rest assured, all your assignments are free of copyright issues and undergo several revisions and quality checks before delivery.

Take assistance to uncover the common name of compounds, citing examples and what nomenclature stands for in chemistry.

How do you name chemical compounds?

In case of ionic compounds, the name of cation is written first, and then the name of the anon followed by suffix –ide. The prefix di, tri, tetra is used to indicate the number of an element in the compound.

What are the rules for naming compounds?

Why is it important to know the rules in naming chemical compounds?

It's very important to follow rules while naming any chemical compound to have a specific single name for a certain compound that doesn't match with an already existing compound. This keeps the unique identity of different compounds with different properties.

What are examples of nomenclature?

is a covalent compound made up of one sulfur atom and four fluorine atoms.

The name of sulfur would be written first followed by the name of fluorine but –ine is replaced by –ide.

The prefix tetra- is used to indicate the four fluorine atoms.

The name of the compound is sulfur tetrafluoride.

is an ionic compound, made up of

The name of the compound is sodium chloride.