Are you a university or school looking for an online tutoring partnership ?
Homework help for Dynamics of Rotational Motion

Physics homework helps for all questions on the effect of force, mass, moment of inertia & more!

2.Physics doubt in electronics for entrance examination on March 13 2022

3.i have problems solving this document

6.Can electron be found inside the nucleus?

7.Photon has mass or not? I am confused, since we say, it has zero rest mass but how does it is affected by gravity then?

8.i just need one question answered should take no more then ten minutes

What is Rotational Dynamics?

Rotational dynamics refers to the study of rotational motion of a body along axes, under the action of torque.

To measure the angular position, we need a reference line fixed in the body also rotating with the body, and perpendicular to axes of rotation. 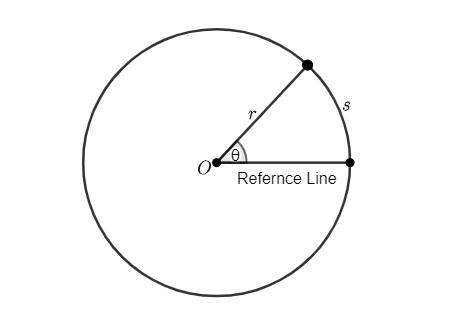 In the above diagram, point O is the axes of rotation. And,

is the angular position, which is measured in radians. And, r is the radius.

Angular displacement is the measure of the angle in radian, by which the position of point changed.

is the angular displacement between position

of the body with angular displacement

during the time interval

The following equations are true for the constant acceleration.

Question 1: Calculate the angular displacement of a student running on a circular field, with a radius of 35 m, and the student has covered a 50 m distance from his starting point.

Explanation: The radius of curvature is 35 m, and the distance traveled is 50 m.

Final answer: The angular displacement would be

Question 2: Calculate the angular velocity of a rotating body about an axis after

, having a constant angular acceleration of

. Initially, the object was at rest

Explanation: We will use the equation of motion

Final answer: The angular velocity would be

Question 3: Calculate the angular acceleration of a body, which gains an angular velocity of 63 rad/s, during the first 8 seconds.

Explanation: The body was initially at rest. So,

Final answer: The angular acceleration would be

High schoolers or College students can take 24/7 assistance from our qualified experts to understand how to use vector quantities for describing the kinematics of rotations and solve complex questions.

Whether you need to solve exercises at the end of the Physics chapter on rotational dynamics or need clarity on some equations given on a worksheet- we’re here to help you find solutions.

Let’s help you understand how objects rotate or assist you to deal with analyzing the general relationship between torque, angular acceleration and moment of inertia. All in all, our top experts are your best bet!

Our assignment help services are designed to help you or VARK (Visual. Auditory, Read/Write and Kinesthetic) learners figure out how to describe objects that resist rotational motions.

With the help of our top aides get help with formulas, equations and regular practice problems in the subject.

Step 1: Fill out our quick order homework help form with detailed instructions for the expert

Step 2: Hire a Physics solver who agrees to your proposed budget and given timeline

Step 3: On receiving your assignment draft, quickly review before releasing payment from escrow

Our experts churn out 100% original and best quality reports with the sole aim to help you gain clarity on tough Physics concepts (Internal link to the physics homework help page). Moreover our Money Refund policy is here to cement your trust and satisfaction in availing our homework help services.

So get ready to meet deadlines by availing top assistance in calculating net torque or “which cylinder will reach the bottom of the incline first?” by getting guidance and step-by-step explanations to simplify your curriculum.

What are rotational dynamics?

Rotational dynamics refers to the study of the rotational motion of a body along axes, under the action of torque.

How to solve rotational dynamics problems?

To solve the rotational dynamics problem, we need an understanding of the equation of rotational motion.

Some other important formulas:

Where angular velocity of the body

during the time interval

, and with angular acceleration α.

What is an example of rotational motion?

What are the important characteristics of rotational motion?

The rigid body undergoes a circular motion about an axis perpendicular to the plane and the center of the circular path lies on the same axes.

Is circular motion and rotational motion the same?

However, in rotational motion, the particles move in a circular path around axes perpendicular to the plane. For example, the Ferris Wheel is rotating around its axes.

So, we can say, the circular motion and rotational motion are not exactly the same.

What is the difference between rotation and revolution?

In rotation, the particle moves around its own axes which is perpendicular to the plane. Example: motion of the fan.

And, in revolution, the object moves in a circular path around another object. Example: Earth revolving around the Sun.