Are you a university or school looking for an online tutoring partnership ?
Statistical Mechanics homework Help at TutorEye

Our experts are available 24/7 to help you with Statistical Mechanics homework problems!

1.1. Find the expectation value of square of energy of particle at x-axis ?

2.I have a physics circuit problem

3.I have a physics problem on magnetic field. Can someone help me with it?

4.If particle motion does not require particle length and particle frequency, why does wave motion require wavelength and frequency? ...

5.I need help with these physics questions, thanks

6.I need help with physics, can you help me please

7.Explain. To train for conditions during a manned mission on the surface of Mars, where the acceleration due to gravity is ...

tion due to gravity is only 3.72 m/s2 , astronaut can be hung on a spring harness while on Earth. To provide the necessary force, we can stretch a stiff (large
View More

no friction). She collides with her friend, weighing 60 lb, at point B, 140 feet down the slope. After colliding, they travel together down the slope on the sled. The slope is maintained, but the ice is a little rougher, with a coefficient of friction of μk = 0.20. a) How fast will they be moving immediately after they collide? b) Will they come to a stop after the collision? If so, how far will they travel until they do? If not, what will their acceleration be?
View More

Statistical Mechanics deals with the microscopic entities, where statistical methods and probability theories are applied to study the behaviour of atoms and molecules. It encompasses the laws of classical and quantum mechanics in order to measure the microscopic constituents of the particle. It is implied and drawn majorly with thermal energy of the system in disordered states and derived on the laws of probability and average behaviour of a large number of particles of the same kind.

Question 1: Maxwell-Boltzmann statistics can be applied applied to ________

Answer: d) all of the above

Explanation: Most of the particles move with the most probable speed. As the velocity further increases, the density of molecules moving with that particular speed decreases.

Question 3: What is the average kinetic energy associated with each degree of freedom?

Explanation: According to the law of equipartition of energy, the average kinetic energy associated with each degree of freedom is kT/2.

Question 4: The ratio of the rms velocity to most probable velocity is ______.

Explanation: The equation of rms and most probable velocity is derived from Maxwell's speed distribution law.

Question 5: What would be the most probable velocity for one Oxygen molecule at 300 K? 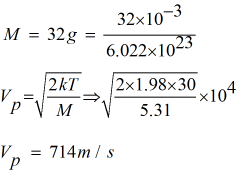 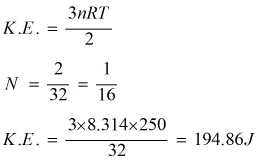 Explanation: The kinetic energy of particle 3RT/2 is dependent only on the temperature. The increase in pressure is compensated by the corresponding decrease in the volume.

Question 8: What is the effect on the molecules moving with lower speed with increase in the temperature?

Explanation: As the temperature is increased, the number of molecules traveling with lower speed decreases whereas those traveling with higher speed increases.

Explanation: Phase space is a 6 dimensional space, consisting of the position x, y and z directions and its momentum in these directions.

Answer: a) most probable speed