Are you a university or school looking for an online tutoring partnership ?
Having trouble understanding the concept of Waves and their Types?

Take the help of our expert online Physics tutors. Build a strong understanding of the most complicated topics of Physics. If you are having any difficulty differentiating between the types of Waves, rely on our most interesting teaching methods.

Wave could be referred to as the disturbance in a medium. It transfers information and energy through the medium, without transferring the matter. 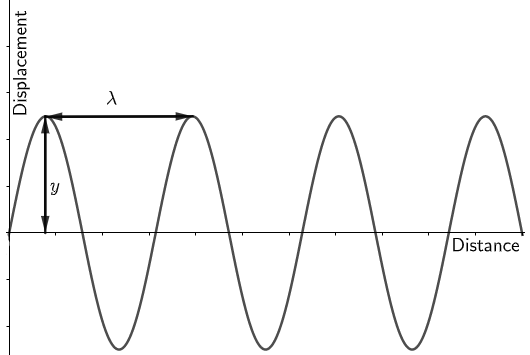 For a wave having amplitude

: The distance of one complete oscillation. It is measured in meters

: The distance from the maximum displacement to the equilibrium position.

: Number of waves passing per second through a single point. It is measured in Hertz

: Time taken by one complete cycle of the wave to pass through a fixed point.

The frequency and time period are reciprocal to each other.

The speed of wave

is the product of frequency

Question 1: Calculate the frequency of a wave which have a time period of 5 milliseconds.

Explanation: We have given the time period as 5 milliseconds, let us convert that into seconds.

So, 5 milliseconds would be

Final answer: The frequency of the wave would be

Question 2: Find the speed of wave having frequency

Explanation: We have given wavelength as well as frequency, let us apply the formula.

Final answer: The velocity of the wave would be

Question 3: Find the wavelength of a wave having a speed of

with the frequency of

Explanation: We have given speed

, let us apply the formula.

Final answer: The wavelength would be

Study the different types of waves with our physics masterminds

What is it that comes to your mind when you come across the term “Waves”? We are sure it is the picture of the water along the seashore flowing back and forth. But does the water actually move from its place or transfer its energy causing many ripples in the water?

Did you ever imagine there was science hidden in the sea waves? If we were to define waves as per physics, it is the disturbance that travels in a regular way along with the transfer of energy. And it isn’t just the water. Wave-like properties are exhibited by sound and light as well.

Waves are categorized into transverse and longitudinal waves. The waves you observe in the water at the beach are transverse waves. The direction of the wave is perpendicular to the motion of the wave oscillation. On the contrary, when the waves propagate in the direction parallel to the vibration, they are identified as longitudinal waves. Sound waves are the best example of such waves.

In a transverse wave, the high point is referred to as the crest and the low point is the trough. The terms compressions and rarefactions are used respectively in the case of longitudinal waves. The number of crests or troughs in any specific period of time tells the frequency of the wave. You can measure the velocity of a wave by multiplying the wavelength and the frequency. Isn’t that fascinating and intriguing?

The only thing that needs to be kept in mind is that waves never transfer mass. They only transfer energy from one point to another.

Our online tutors are here to help you get into the details and clear all your doubts. With their vast knowledge of the subject, anyone, be it school or college students, will ace the topic and secure good grades in exams and tests.

Looking for solutions to the most complex waves assignments? Bring in your doubts and queries, and have your concepts cleared in no time.

Bring in your doubts and queries, and have your concepts cleared in no time.

Make the most of our Physics assignment help services today!

How can you seek help in solving Physics assignments on Waves?

With the help of the expert homework helpers at TutorEye, you can now get detailed answers to the most complex questions on Waves.

Follow the below-mentioned steps to get solutions to your problems:

Step 1: Fill in our homework help form, followed by uploading your worksheet problems.

Step 2: Hire a Physics tutor with whom you have agreed on a price and submission deadline, best suited to you.

Step 3: Payment to be released from escrow by you, after being completely satisfied with the report.

TutorEye takes pride in delivering quality and well-researched assignment solutions. You will never have to face any copyright issues with the work submitted. Our Money Refund Policy assures you of the quality of the work provided by our top-rated problem solvers.

What is the wave definition?

Wave  is the  disturbance of the moving energy from one place to another.

What is the classification of the wave?

Waves can be classified according to the direction of vibration relative to the energy transfer.

How are waves formed?

Waves are mainly formed by the wind. It's the first step in the formation of surfable waves.Wind interaction of the ocean surface far from the coast can be create some of the best waves on earth.Local shore winds can also produce waves but they usually destroy the quality of the breaking waves.Onshore winds are typically known for creating choppy and bumpy waves because they push by  the direction of the wave making them unstable.

How do waves work?

Waves are passing energy through the water causing it to move in a circular motion.

How do waves carry energy?

How are waves produced?

Waves are produced by something that vibrates along  the matter that waves travel through it . it can be a solid, liquid, gas, or a combination of these.

How do waves transfer energy ?

Waves can be  described by their amplitude, frequency wavelength and along the period. Diffraction is the spreading out of waves when they pass through a gap.

How are waves carriers of energy?

Get started with your homework now!